Female Superiority Now: Eliminate the Scum of the Earth* 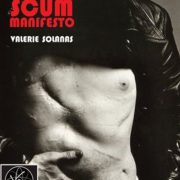 Female Superiority Now: Eliminate the Scum of the Earth

Every good Domme knows and is capable of recognizing somewhere within herself just how superior her existence truly is. It is glaringly clear that the male race, at its core, is the scourge of the earth. You must accept Female superiority now.

This week, my blog is a beaming homage to the brilliant Valerie Solanas.

She outlines many key points that illuminate the depth and undeniable of male inferiority. Now, I know many of you male readers out there are more than a bit mentally inept. With a little elbow grease, hopefully, your unevolved brains will be capable of grasping the great truths embedded in this text. Educate yourself on Female superiority now. It may ultimately be your only chance at survival.

The next few passages are excerpts from The SCUM manifesto.

It is a must read for any man who wishes the survive the oncoming reign of Females. Accept Female superiority now.  Take a moment to allow these few morsels to sink in:

“Every man, deep down, knows he’s a worthless piece of shit.”

“Overwhelmed by a sense of animalism and deeply ashamed of it; wanting, not to express himself, but to hide from others his total physicality, total egocentricity, the hate and contempt he feels for other men, and to hide from himself the hate and contempt he suspects other men feel for him; having a crudely constructed nervous system that is easily upset by the least display of emotion or feeling, the male tries to enforce a `social’ code that ensures perfect blandness, unsullied by the slightest trace of feeling or upsetting opinion. He uses terms like `copulate’, `sexual congress’, `have relations with’ (to men sexual relations is a redundancy), overlaid with stilted manners; the suit on the chimp.”

Yes, the “suit of the chimp” is a befitting metaphor. I need not cry for Female superiority now; it is an undeniable truth. Dance monkey, dance!

Females will reign.  The world will finally be right.   The feebleness and extreme shortcomings of the male will no longer plague us.   I will help you learn to serve and survive.

“Despising his highly inadequate self, overcome with intense anxiety and deep, profound loneliness when by his empty self, desperate to attach himself to any female in dim hopes of completing himself, in the mystical belief that by touching gold he’ll turn to gold…
… the male craves the continuous companionship of women. The company of the lowest female is preferable to his own or that of other men, who serve only to remind him of his repulsiveness. But females, unless very young or very sick, must be coerced or bribed into a male company…”

“…If all women simply left men, refused to have anything to do with any of them — ever, all men, the government, and the national economy would collapse completely. Even without leaving men, women who are aware of the extent of their superiority to and power over men could acquire complete control over everything within a few weeks.  (They) could affect the total submission of males to females. In a sane society, the male would trot along obediently after the female. The male is docile and easily led, easily subjected to the domination of any female who cares to dominate him. The male wants desperately to be led by females, wants Mama in charge, wants to abandon himself to her care…”

“…Incapable of a positive state of happiness, which is the only thing that can justify one’s existence, the male is, at best, relaxed, comfortable, neutral.  And this condition is extremely short-lived, as boredom, a negative state, soon sets in.  He is, therefore, doomed to an existence of suffering relieved only by occasional, fleeting stretches of restfulness.  Which state he can only achieve at the expense of some female. The male is, by his very nature, a leech.  (He is) an emotional parasite and, therefore, not ethically entitled to live, as no one as the right to life at someone else’s expense.”

You will learn to do our bidding.  You will eat delicious pussy to our hearts’ content.

…Men are realizing more and more that the female interest is in their interest. Men are learning that they can live only through the female and that the more the female is encouraged to live, to fulfill herself, to be a female and not a male, the more nearly he lives.”

I will put in your place. You will serve females, or you will be squashed out of existence.