Fantasy Sex Stories: Bubby showed me his so I showed him mine ♕ 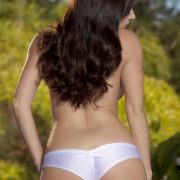 I know you are craving some fantasy sex stories, aren’t you?

It was after midnight and everyone was sleeping, or so I thought. As I laid in bed playing with my pussy, I heard footsteps down the hall. I pulled the cover over my face and waited for them to pass, but they stopped. I listened closely and the footsteps had stopped in place. The next thing I knew my bedroom door opened. I wasn’t sure who it was or even what to do so I just laid there and pretended to be asleep. It was dark in my room but the moon shining through the window gave enough light so that I could peak and see who was in my room without them noticing.

When I opened my eye to peak, I saw my brother standing at the foot of my bed. He never said a word. He was just standing there licking his lips, with his cock in his hand. I quickly shut up eyes before he had time to notice. Then I waited to see what exactly he was planning to do. After a few moments of him staring at me while stroking his cock, I felt the cover slowly pulled off of me. Although I couldn’t say anything, my pussy was getting wetter by the second. Of course, I was trying to take care of myself before I heard him coming down the hall.

It seemed only fair to go along with this and let him get me off since he was the one who interrupted me. This is when my fantasy sex stories get even more fun!

Once he pulled the cover away, he slowly crawled into bed sliding his hands up my thighs. He was squeezing and caressing and kissing all the way up until he reached my pussy. It was obvious that he was trying to be sneaky so he wouldn’t wake me, but at the same time, he was enjoying every second. As he kissed and caressed his way to my pussy, I didn’t budge. I kept still while enjoying it just as much as my brother was. He slid his tongue so far in my cunt while fingering my clit, I accidentally let out a moan.

He stopped and looked up at me in shock. I smiled at him and slid my foot to his cock, stroking it up and down. That way he knew it was ok and I was happy to have him pleasing me. He went back to eating my pussy and squeezing my ass and thighs. After I came all over his face, he said: “sleep tight sis, goodnight”. Then he started to get out of bed to go back to his room.

I kissed him told him to fuck me like he really wanted to do.

It was obvious that he wanted to fuck me but he was still shocked that I woke up and let him eat my pussy. I know he was nervous to go further, but I did wonder if he would’ve gone further had I still been asleep or at least pretending to be asleep. It didn’t really matter at this point. He had stripped down and climbed between my legs. His cock was as hard as a rock and it was bigger than I imagined it would be. It felt good, him teasing my clit with his cock rubbing against it, but I could only take so much. I was so hot and horny I reached down and put it in myself. It felt so fucking good! I wrapped my legs around his waist and pulled him in deeper.

As you can imagine, we fucked and fucked and fucked some more! Of course, he came inside me, and yes, I loved feeling him shoot his hot creamy loads deep in my pussy. The best part of this night was, this was only the beginning. I knew we would be fucking on a regular basis thanks to his courage to come into my room that night.