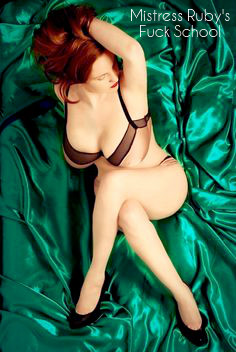 After attending a few classes, it was time for Mistress Ruby to give us our first exam.

I didn’t know it was exam day until I walked into the classroom and read the board. Written in big white letters where “Today is exam day, be prepared ladies.” I had always done well in school with exams and tests. But this was different, this was fuck school.

I took a seat at my desk and tried to figure out what an exam at fuck school would be like. And I really had no clue. Luckily, Mistress Ruby walked in and I was about to find out. She sat on top of her desk and crossed her legs with a side grin.

“I’m sure you’ve all seen the board. Yes, There is tests in fuck school too. Now they are a lot different. This exam is to measure what you’ve learned in class so far. We will be doing a small photoshoot to see just how comfortable you all are with being sexy, and vulnerable. But that’s not all. You all will be your own 5-minute videos. Now don’t worry, it won’t be anything hard core yet. Just a simple, short porn. Unlike last time, you will not be picking your male counterparts. I have already prechosen them. If you ladies will line up at the door of the classroom across from us, they’ll start getting you ready. Good luck ladies!”

We lined up at the door and they called my name first, and then another girl by the name of Mia Dao.

She was a very small built Asian girl, with the prettiest long dark hair. She had large breasts for her body size, but she was so sexy. We both walked in and they put us in different lingerie. They put me in a black corset with thigh highs and black heels. She was wearing a white strapless bra and a white lacey thong, also in black heels.

After they dressed us, they told us to walk down to classroom A for the beginning of the shoot, and the video. We walked in and it was set up like a modern living room. A nice leather couch with a glass coffee table. “Blair and Mia right?” A tall dark skinned man asked us. “Yes! That’s us!” I replied. “Nice to meet you, I’m Jackson. I’ll be your partner today for the shoot and the video” He was very professional about it, and god was he beautiful. We started with the picture’s of us separately, then together. We were both getting really into it. I felt so sexy.

After the pictures were over, it was time to move over to the video. The director walked up to us and told us what was going to happen.

“So basically we have 5 minutes to get all three of you off. Which is quite a challenge. On top of that Ruby has asked that we only do one take. So we need to make this count. From the notes, Ruby has written about you ladies we have decided the best way to do this. Which would be starting off like you guys were about to have a three some, with the undressing and what not. And then when you go into position, Blair will be getting fucked in the ass while she eats Mia out. So give it your all, we only have one shot!” And with those words we all got on the couch and everyone got into position. Lights were on, and the director yelled “Action!”

It started off with Mia and I helping each other undress, and then we stipped Jackson down.

When his erect cock popped out I had to keep my jaw from dropping. His cock was a solid 9 inches. But I couldn’t let that distract me, I had to focus. Mia was on the corner of the couch with her legs spread. Me, buried between them licking that dripping wet pussy. Jackson got behind me and inserted his large cock into my asshole. In the heat of the moment, I forgot there were cameras on.

Once everything was done the director told us how well we did, and that he thinks Mistress Ruby will definitely be impressed. The next girl walked in, which was our que that we were done. I walked out of the classroom and to my car with a red face and a smile. That was the best 3sum I had ever had, And It was on video!