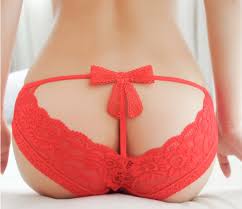 Matt said he had another gift for me and you should see it, it’s gorgeous! I had to put it on straight away when I saw it.

He gave it to me in the bedroom and since I knew the sort of what it was I stripped naked as he watched. Then handed me a pretty box tied with a ribbon and I sat on the edge of the bed as I opened it. I parted the tissue paper and the first thing I saw was a satin red bra with black detailing. Running my fingers over it I took it out so I could see what was underneath.

There was a tiny pair of red panties that I knew would barely cover me and when I held them up I saw that they were crotchless.”

You naughty boy!” I said, teasing him as I went to the next item.

It was a red garter belt and a pair of red thigh-highs for them. I couldn’t wait to put them on, I was going to look so hot in them. We were going to have hot sex. Scooping up my goodies I then went to the bathroom while he got rid of the box and paper.

He was lying there naked and slowly stroking his dick as I came out. Smiling he watched as I got into bed with him. I knelt at his side so he could see most of me and he ran a hand over the top of my thigh highs then played with the tiny waistband of my panties. “You look so sexy,” he said and I straddled his waist. “I know, thanks to you,” I said and leaned forward, kissing him as I gently rubbed my pussy on him.

The panties slid over him and the crotch parted so I could feel his skin. I sat up and turned around giving a view of my back and lifted my ass. Reaching for his dick I held it as I guided it into my pussy.

I lowered myself down and moaned as my pussy stretched around him.

Bracing my hands on his thighs I started riding him, lifting my ass up and down as his dick rubbed my pussy walls. He put his hands on my waist and held me as I moved on him. I bounced my ass on him as I clenched my pussy around his dick and went a bit faster.