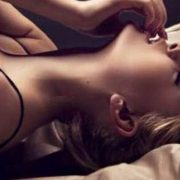 I came into the hypnotist’s office in the right mindset, ready to give up control and open to anything. He asked me to lay on his couch, close my eyes, and relax. First, he walked me through a relaxation technique. He had me concentrate on relaxing every part of my body starting with my toes, all the way up to my head, and finally, to my mind. It definitely did the trick, I felt sleepy and almost in a bit of a trance already.

Then, his voice got calmer and more relaxing as he started putting me in a deep hypnotic state. He started by telling me that my body was getting heavier and heavier and I was sinking into the couch. It really felt as if it was happening. Then he had me imagine walking slowly down a flight of stairs and each step I went down, I went deeper into my subconscious mind. When I reached the last step, I was still aware of my surroundings in the office but I could tell I was in a very deep trance. I was ready for my erotic hypnosis orgasm!

Guiding Me to Orgasm

The hypnotist then asked me to imagine being naked. Next, he had me not only imagine but experience the sensation of having my clit slowly licked. I really felt it! Being in this trance made it possible to really feel a soft tongue lick on my pulsating clit. And, the best part is, when it’s all in your head, it’s happening exactly as you like it. I started to moan loudly as he continued to walk me through my pleasure. His voice guided me as he said the licking was getting faster and faster against my clit. It was so real, I felt it all. I gasped and moaned as he was guiding me to my erotic hypnosis orgasm. I couldn’t believe I was getting close and I hadn’t even touched my pussy!