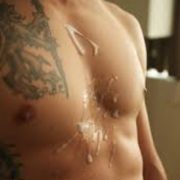 The girls begged him to taste his own cock, they begged and cried until he did what he was told.

Which didn’t take long. It was easy to tell that he had done it before. He shoved the whole thing in his mouth and with his lips pressed around his cock, he started bobbing it in and out of his throat. The girls loved seeing him suck himself off like that and fuck himself in the ass at the same time!