Cuckold slave maker David is one person I admire.  Today, I have admiration for him because I didn’t realize this was a real thing.  There are many of us that are completely unaware of our power; those like myself that decide not to use their power; then others that wish to enforce and exhibit their power at all times.  Imagine what it would be like to not do what you are supposed to do; then someone comes along to take what you have and ration it out so that you do that and more at their disposal.  Personally, I wouldn’t enjoy being the house pet, but there are those born to serve; have no light of their own; thrive under perverse and strict instruction.

Joe and Beth are a beautiful couple.  Beth is an engineer and could definitely survive without Joe.  Joe knows he doesn’t please her in bed and doesn’t hold a grudge when she slips and falls into the arms of another man here and there.  As a matter of face, Joe delights in hearing the tales of her lovers and sexual encounters.

Beth’s work husband is a bald, sturdy in stature Black man named David.  David loves being everything that Joe isn’t.  Beth adores him, respects him, and as their relationship grows her respect for Joe diminishes.  Eventually, David is introduced to Joe.  David touches Beth affectionately, makes her laugh, and doesn’t care who is watching.  Joe sees that hand on Beth’s butt and says nothing.  Hears their inside jokes and laughs too, for Beth has told him all about them.  David sees the delight a mere cheer in Joe’s eyes as he flirts with Beth.

Beth picked the right one!

The Kinky Things He Will Do!

Check back with me on Wednesday to hear about how Beth’s sex with David mesmerized Joe.  How is David able to screw Beth until she faints and upon her return have Joe’s undying servitude? 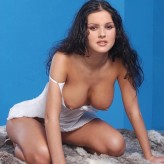