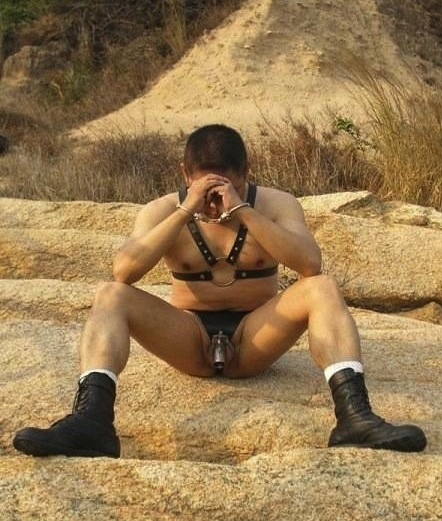 Sometimes I put my boyfriend in chastity. I find it’s a good way to make him appreciate me, especially when I come home after a night of sex with someone else. He sees me glowing and wishes he could make me look like that. When I finally do take the cage off him he pounces on me like an overexcited dog, throws me on the bed and fucks me until I feel like I’m made of jelly. This time my poor little boyfriend had to spend two weeks in chastity before I let him out.

I took the key out of my hiding spot and went to the bedroom and found my boyfriend waiting for me. He was already naked. I showed him the key and put it on the dresser then took my clothes off. He groaned as he started to get hard and the cage constricted him. I picked up the key, took the cage off him and put them away, taking my sweet time of course. By the time I was done he was rock hard and unable to wait anymore. He pushed me on the bed, shoved my legs apart and slammed his dick into me.
I love it rough and my pussy gushed as he pounded me hard and fast, his dick impaling my pussy and bruising it. I was rocking against him and was just starting to get into it when he suddenly came. Seriously? Already? I know I shouldn’t have been surprised because it has been two weeks but come on! I didn’t even have a hint of an orgasm, just a few jabs. He looked a bit embarrassed and disappointed though so I couldn’t get mad at him. Instead, I changed tactics and kept our night of sex going.

“Is that the best you can do?” I said in my fake angry tone of voice.

I let my boyfriend get up and I wrapped my hand around his dick.

I gave him a few strokes and teasingly said: “You’re lucky you’re ready to go again, my hand was getting tired and I was starting to think about using a hairbrush on you.” He laughed, pushed me down on the bed and said: “You still can if you want.” I pretended to think about it for a second then said “Nah.” and wrapped my legs around his waist. He lasted a lot longer the second time around.