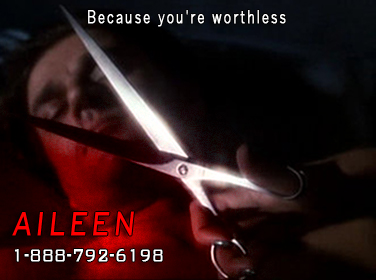 Fact: castration is the EASIEST medical procedure to perform. Makes sense — especially considering your cock is the most USELESS appendage you have!

Are you a pedophile? A rapist? Both? Dig deep here.

Are you a closeted transsexual desperate for catharsis?

Did you answer yes to any of the above?

Even if it was just one — and actually, even if you DIDN’T — the answer is clear: a castration fantasy phone sex call is the final solution you NEED. Short of black widow phone sex, maybe.

Still not convinced? That’s understandable. You have been living with that miserable thing attached to you for your whole life . . . but the thing is, you don’t have to anymore!

WHY IT JUST MAKES SENSE:

1. It’s pragmatic. You need this more than anything. In fact, it’s extremely likely that you don’t need anything OTHER than this. (and as I mentioned above: NO ONE will miss it, except maybe you. but don’t worry, you’ll get used to it and eventually forget you ever had one)

2 . You deserve it. Much more than anything else you’ve ever received, actually.

3. It’s low budget. It wouldn’t cost me a fucking CENT, which conveniently keeps my annual allotment for “Pathetic Loser Hope For A Cure” funds exactly where it’s always been, budget-wise: ZERO!