Jerk Off And Pay Me! 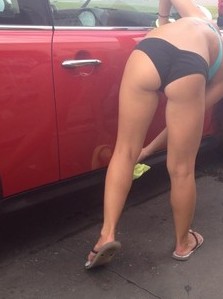 The new guy that moved into the house next door to us a few weeks ago doesn’t know that I have been noticing how he looks at me. He moved in with his wife and kid, but every chance he gets he keeps his eyes on me.When I go to get the mail in the afternoon, I can feel his eyes following me. When I’m taking the groceries out of the car, when me and my boyfriend take a walk in the neighborhood- I can always sense when the new neighbor is gawking at me. It started to get really annoying and no matter how many times I told my boyfriend about it he would always say that I was just being “delusional”.

One day I decided to catch him in the act. I slipped on a nice pair of my tightest booty shorts and cute little belly top and waited for him to get home from dropping his daughter off at school. When he went inside of the house I came outside and pretended to do something in the garden. I made sure to bend all the way over and direct my plump ass in the direction of his window. I moved closer and closer to the window where I knew he would be watching and right when it seemed that I was going to head into my house I turned around quickly and caught him!

I wasn’t surprised to find him standing in the window with his cock in his hand. He was jerking off with eyes closed when I caught him. When opened them he saw me staring back at him. I was laughing so hard that tears were coming out of my eyes!!! He turned beet red and tried to stuff his cock back into his pants. I pointed and laughed while motioning for him to open the door and let me in. He hesitated at first, but then he finally opened the door.

I confronted him and asked why he felt the need to always jerk off his cock off when he saw me. He said that I reminded him of an older version of his daughter and that he really couldn’t help himself. I told him that I didn’t mind him doing it and that if he helped me pay off my “student loans” I would let him jerk his cock while I played with my pussy. When he agreed I told him to pull out his check book and right a check for $5,000. He did it with a smile on his face.

I dropped my panties and tickled my clit while my neighbor jerked his cock. He placed his cock in the inner lips of my clit and jerked himself until he came hard all over my pussy. He said that he would write me a check for whatever I wanted just as long as he had the chance to jerk his cock for me in person. It’s a sweet deal that works out perfectly for the both of us. I could do the same for you. You give me what I want and I give you what you NEED. Everybody wins!