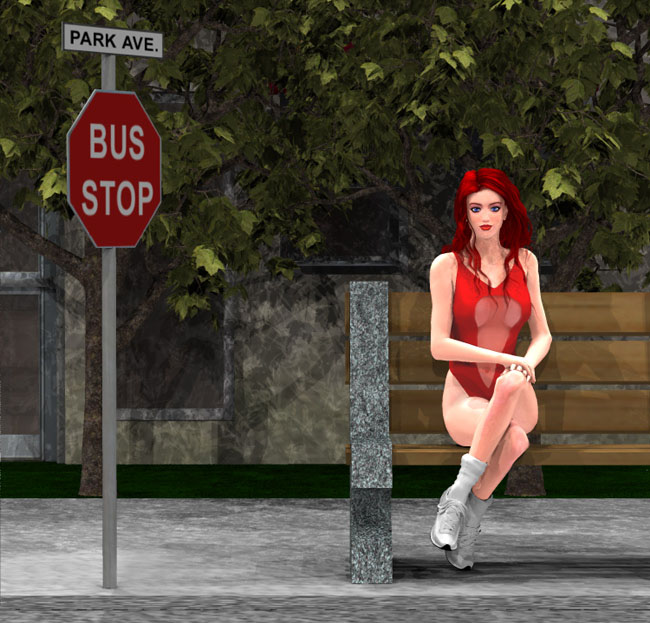 On a day like this last Friday I had a friend’s birthday party to attend which was all the way in South Beach, a forty minute bus ride from my place. Against my better judgment I had already had one too many pre-game shots of tequila, and so I found myself stumbling towards the bus stop in a tiny white miniskirt, sky high black stilettos and a black scoop neck blouse.

By the time I had made my way to the bus stop I could feel the sweat starting to run down the small of my back and inner thighs. I was getting a lot of attention from passing traffic and cars slowed to beep their horns or leer at me through their windows.

The bus stop offered no shade and I felt like I was about to pass out, by this time I had a trickle of sweat running down my cleavage and my pussy felt like it was at a million degrees! I was about to give up on the stupid bus as I wasn’t looking forward to the 40 minute journey and I could always make my excuses to my friend when a sleek black Bentley with dark tinted windows pulled up next to me and slowly put the window down. The driver was a very attractive Hispanic guy, about 40 with a wicked look in his eye. “You look really hot.” he said with a cheeky grin. “I am! I feel like I’m going to die!” I replied, desperately fanning myself uselessly with a leaflet I found on the bench.

“The AC is really good in my car…” he said. I gave him a withering look. “Thanks.” I reply curtly. “Where are you going then, can I give you a ride?” He asked, slowly licking his lips while holding my eye intently. I knew I the last thing I should be doing right now was taking a lift from complete stranger, but the sun was so hot and I could feel the cool of the AC through the window so I decided “why not?”

I opened the door and sat carefully down in the passenger seat, trying not to expose my pussy as I had no panties on under my skirt. He looked at me with hungry eyes, assessing my body from head to toe. “I don’t usually take rides from strangers but you seem OK and it’s so bloody hot!” I stammered, trying hard not to feel tense as his eyes still scanned my body and a naughty smile played on his lips. “What makes you think I’m OK? I could be a rapist.” The way he said it immediately made me feel nervous and I wondered if I was ever going to make it to the party.

I tried unsuccessfully to make small talk and so we drove along in silence for a while but I could feel his eyes burning into me, staring at my tits and long, smooth legs. I crossed them nervously and tried to make conversation “So are you from around here? Do you pickup girls at the bus stop often?” I said. “You’re not wearing any panties are you?” He replied, ignoring my question. “Erm, why do you say that?” I ask. “When you crossed your legs I saw a flash of your cunt” he said matter-of-factly. I immediately blushed as I felt his hand touch my moist thigh. “Don’t be shy, it looks pretty” he whispered in my ear. I felt the car slow to a stop and when I looked out the window we had turned into a empty, poorly-lit derelict hotel parking lot.

I looked over and could see as huge bus sized bulge in his pants and suddenly I realized he was going to fuck me. He roughly pushed his hand up my skirt and forced my legs apart while his other hand flew to my throat and clamped around it. He began to ferociously rub on my clit while pushing my legs further apart with his hand. “This is what you want, isn’t it?” he whispered softly in my ear, and I realized how attractive he was and how much this extremely dangerous and intense situation was making my pussy begin to throb. He kissed me hard and quickly, forcing his tongue into my mouth, at the same time pressing two fingers inside my now soaking pussy, making me yelp quietly.

Opening my legs and leaning into him he took his hand off my throat and shoved it inside my bra, cupping my full tits roughly as he fucked my cunt with his fingers, taking them out to spit on them before adding another wet finger deep into my snatch. By this time my legs were spread as far apart as I could manage in the confines of the car, my foot on the dashboard and my hips bucking against his fingers.

He suddenly took his fingers out of me and quickly unzipped his pants, and a long, thick cock sprang out of his zipper. “Suck it.” he said, grabbing the back of my neck and forcing my head towards his rock hard dick. I barely had time to part my lips when he forced the head of his cock into my mouth and pushed it as far to the back of my throat as it would go. I immediately gagged but he held my neck with both hands and held his cock there until the muscles of my throat relaxed around his shaft. As I relaxed he pushed his dick further into my throat, until it was completely swallowed and my lips were on his balls. Then holding my head with both hands he began to slowly skullfuck me, pulling my head up and down as his shaft slid in and out of my throat. He began to rape my face faster and faster ramming his cock in and out of my mouth relentlessly, making my eyes water and my throat contract.

He was slamming my face against his balls, grabbing handfuls of my hair when he pulled his cock out of my mouth and dragged my head up by the hair until I was looking him in the eye. “You like that you dirty whore?” he said, spitting a glob of spit into my mouth. “Yes’ I replied. He slapped me hard across the face “yes what?!” he screamed, pulling my face closer to his with my hair. “Yes sir” I whimpered. He pushed my head back down to his pulsating cock and forced it back down into my throat and began fucking my face so hard that tears streamed down my face and I gagged violently on his huge member. I felt his balls begin to tighten and I knew he was about to cum. “Swallow it you bitch, if I see one drop spilt you’re dead.” He pounded his dick furiously into my throat and let out a long deep growl as he pumped his hot load into my ruined esophagus. He held my head there until he had completely drained his balls into my mouth, then slowly pulled my head up, inspected my face to make sure I had swallowed it all. “Good whore.” he said and pushed me back onto the passenger seat. I had mascara running down my cheeks and my hair was mashed up and knotted with snot and spit. He zipped up his pants and turned to look at me as I tried to smooth my hair and pull down my skirt, the realization of what just happened dawning on me. He started the car and pulled to the exit of the parking lot and stopped. “There you go.” he said, with a devilish grin, gesturing out of the window to the row of houses opposite.

I looked over and realized it was my friends place! I was so flustered after what had happened I didn’t even remember giving him the address. “But, erm, aren’t we going to fuck?” I asked, feeling slightly roughed up but nowhere near satisfied. “Nah…” he said nonchalantly with a shrug of his shoulders, then reached over and popped the door open. “Nice meeting you babe, have a good time at your party.” I stumbled out of the door and stood there, dazed and confused, but horny and wet as hell, I wanted his dick! Before I could even reply he had closed the door and pulled off, leaving me standing there bewildered. I turned and made my way to my friend’s house and rang the doorbell. She opened it and her face widened in shock when she saw the state of me “What happened to you?!” she asked “I got caught in the rain” I replied as I went past her into the house, but I saw the look of confusion on her face as she looked up into the clear blue Florida sky.

I don’t mind taking the bus so much anymore, in fact I’ve been back to the bus stop every Friday since that day in the faint hope that a sleek black Bentley with dark tinted windows will pull up again…