My Boyfriend has a Sock Fetish* 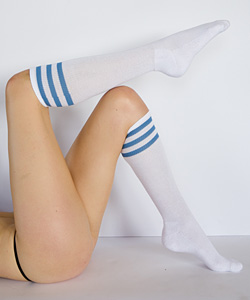 My Boyfriend has a Sock Fetish

I have to admit, I was a little taken back the first time I saw him jerking off in my dirty sock.  I had just came home from the gym, stripped off my clothes into the hamper, and got in the shower.  Apparently, he would wait for me to get home just to have his way with those sweaty socks! What is a sock fetish?

He said he would wait for me to start the water and head to the hamper.  His favorites were freshly worn socks, but he would also go for the ones left in the hamper for a few days.  He would press them on his face, inhaling deeply,  and slide it over his cock.  He said he would the most intense orgasm just thinking about my feet in them.

I wanted to make him happy and I’ve always had a thing for new kinky fetishes like his sock fetish.  From that day on, I would come home from the gym and let him indulge in my feet.  He would help me out of my shoes and I would rub my sock covered feet on his face.  He would get so hard it was amazing! As we would fuck, he said he could still smell them on his face which would make him cum harder than ever before.  I was never so excited to get some from the gym in my life!