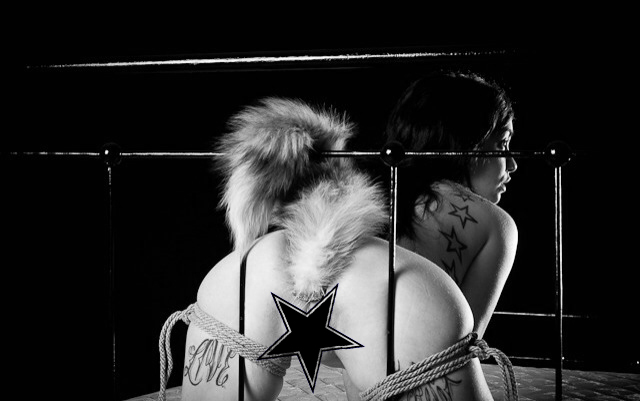 I walked in and the entire club was low lit with red lights. Now since I had just stumbled upon it I did not come prepared with a slave. Luckily, there was a line of slaves chained to the wall. Waiting for a master.

They were begging for a master. They kept pulling at their chains like animals wanting to be free. Some of the slaves were dressed in all black and leather, other’s in just normal every day clothes. As I walked up to the host, she checked my ID and gestured to the wall of slaves. I smiled, I was already getting excited. My very own slave for the night!

So I looked at all the slaves against the wall and saw a sweet looking girl. Her clothes resembled a doll, I believe the style is called Lolita. She had long black pig tails hanging down and curling around her face. I knew I had to have her. So I pointed at her and she was brought to me. She had a leash and collar so of corse I made her crawl into the club.

As I got further into the club there was pretty much any BDSM item you could imagine. There was a girl in the middle of the room, tied to a table, and men were taking turns on her. I sat at a table next to the wall. I wanted to sit back for a while, enjoy a drink, and really see what this club was all about. After a few minuets or so a waitress walked over to me and took my drink order. Then she handed me a menu and told me to take a look at what I would like to order while she got my drink.

I put in my order and the waitress came back with the items. I held the items up to her face and said, “Now, are you going to be my good little puppy?”

“Woof woof!” She said with a big sweet smile on her face. So I made her undress, fastened on her collar and ears, then I bent her over and with a little effort I shoved the tail butt plug right into her tight pink asshole. She let out a loud, “WOOOF WOOF” and started to pant. I patted her head and stroked her long black hair. “I will call you Luna, because of your pretty dark hair.” I said.

She let out a cute little bark and started to rub against my leg. Now I know there could of been so many other thing’s I could of done to her. But trust me I was just getting started. As the night went on other slaves dressed up as cats, dogs, bunnies, foxes, even a few horses would walk by. Well Miss Luna would growl or bark at all of them. Every time she did I yanked hard at her collar and scolded her. “Behave! You are embarrassing mommy. Now be a good little girl or I will have to punish you.” I said as I started to pull the butt plug in and out of her ass. The the little bitch growled at me. So I stood up, and drug her over to a bed that was in the club.

It was pretty much a bed frame and a mattress. As I walked up a group of men looked at me and said, “Yes, mistress.”

“Luna here has been a very bad little girl. She has been growling at her mistress.” I said as I handed her leash over.

“Oh, that will not do. What would you like us to do Mistress?”

“Tie her up, NOW. This little bitch need’s to learn how to behave.”

I looked over and saw a large black man. He was a slave and dressed up as a Doberman. Tall pointy ears and a large massive cock hanging between his legs. I asked the men who he belonged to and a man stood up and said, “This is Brutus. He is my prized stud.”

“Very handsome. How would you like to breed with my bitch? She is right over there.”

The men had already had Luna tided up. Her legs were up and her pussy was wide open. Brutus went over, took a few sniffs of her pussy and started to get excited and bark at his owner.

“That will be just fine.” The man said.

So we all sat down to watched the show. After Brutus had finished by blowing a huge load in her pussy we all took turns on poor little Luna, including myself. After that she has been a very well behaved little bitch for months now. I let Brutus have his way with her any time he wanted. Now they are expecting a little litter. I can’t wait to see what color they come out as. 😉