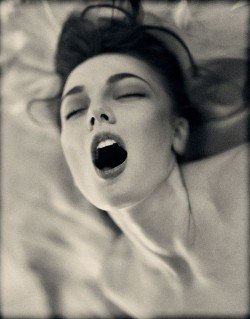 The third man stood in front of me and tilted my chin up, saying, “Taylor, the three of us would like to give you an unforgettable experience tonight. Something that will make you want to stroke your clit every time you think about it, for a long time to come.”
Ordinarily, I’m the kind of girl who wouldn’t consider anything like this. I am only 21 as it is, and not very sexually experienced. However, there was something about this group of men. It was as though I was hypnotized, hopelessly drawn into their enigmatic masculinity.

We all have 8-inch cocks, and are very experienced doing this.”

I only felt shocked for brief moment, then I glanced down and saw the huge bulge in the pants of the tall man in front of me. I couldn’t deny myself this pleasure, but I quickly agreed. We decided to go to a hotel close by. I know their names, but very little else (Brian the black man, Johann the blonde Swede, and Igor the brunette Swede). Brian is the statuesque, muscular black man from the Bahamas. The huge blonde and brunette, both replicas of Hercules, are Johann and Igor.

I was practically salivating at the mouth as we walked into the hotel. I get to savagely fuck a sexy black stallion AND two Scandinavian Gods all at the same time! As soon as the door closed, the group began tearing my dress and lingerie off, while I was whipping off their pants.
Brian carried me to the bed and began sucking on my swollen clit like a hungry man. As my pussy quickly began to throb and squirt female nectar in his mouth, Igor squatted above me and forced his thick cock in my mouth. I instinctively began sucking, and Brian plunged his chocolate meat stick into my freshly gushed pussy. I screamed out in pure ecstasy, I’d never had such a huge cock before!

I instantly fell onto the bed, feeling as though I were flying into euphoria. The bed was wet with my female juices.

Hot College Girls are waiting for your call for Steamy PhoneSex!