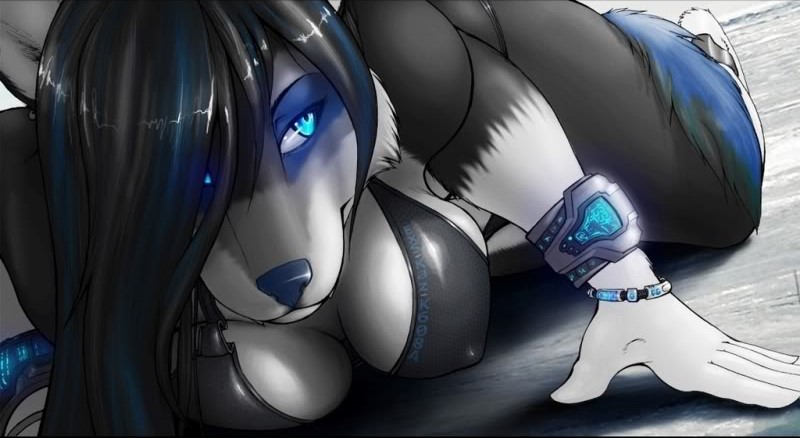 I have been wanting to be a little extra daring lately. I however wanna remain semi-anonymous. So I have lots of fun unique people always coming into my store. I met a young lady who was sporting a long bushy tail. I leaned over the counter for a better look and asked her to bend over. So I asked her what was with the tail? She said she was a Furry.

I heard about Furries but was seriously lacking in what a Furry really is. She told me how it’s just a lifestyle. She enjoys dressing up and being around fellow Furries. Her Furry name was Fox Swiftpaw. Cute I thought to myself.

She invited me to a convention in the city that was coming up in a couple of weeks. That gave me some time to get an idea of who my Furry would look like. I also had to come up with a name. I wanted something like me. I’m always called a man-eater so I decided on being a sexy wolf. The name I gave myself was Raven Bloodfang.

I had my outfit tailed a bit so the large sexy wolf head could fit and not bob around. I pulled on the rest of the suit and had a look. My suit had a sexy appeal I won’t lie. Raven Bloodfang had large tits and a sleek toned stomach. She had a very long bushy tail and just like me, big green eyes. Her smile looked coy and flirty. I was hoping this might turn into something sexual.

I got to the Furry show and mingled around. Felt safe knowing I could hide in Raven’s large head. I hadn’t been there for more than ten minutes and I had other Furries come up and scratch my back and rub up on me.

What was fun is, you couldn’t tell if they were female or male people.

I spent the day having fun and socializing with all kinds of people. As it got late I started back to the room I booked in the hotel. A gang of Furries I chatted with for most of the night offered for me to join them in their room for a few drinks and rubs. I had such fun I wanted to see if they might reveal themselves to me.

After a few drinks and still, in our suits, things started to become more than just scratching. The Furry group surrounded me and another sexy Kitty. They pulled off our suits but left our heads in place. I felt a soft paw start rubbing my tits and running down my body to my yoga pants. They were pulled down by one of the Furries dressed as an Action Raccoon. I forgot all about Kitty and focused on the two that were with me.