Being a Bad Boy Sometimes Means More Than Spankings! ♕ 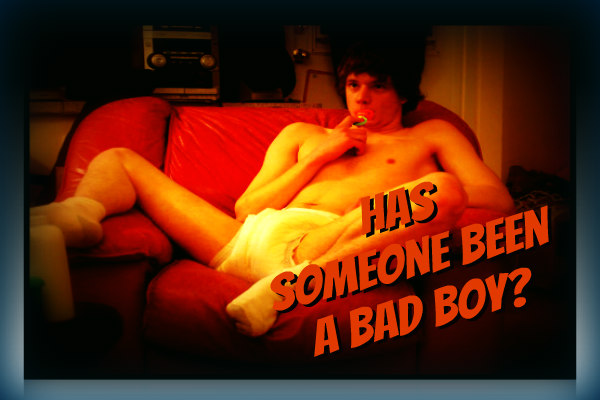 Being a Bad Boy Sometimes Means More Than Spankings!

I was hired to be a babysitter the other day. After he told me that he found me on The Backpages I knew that it was more than just a sitter for some little brats. When I got to his door that theory was confirmed. He was an adult baby, and this bad boy needed himself someone to look after him. He was in luck too, with anticipation of who I was sitting for I made sure to bring my bag full of my favorite toys to play with him too!

I started with something simple. Little JJ had already messed his diaper, and boy was it stinky! I held my nose and laughed at him. Such a big pile of poo! He messed his diaper and giggled as the warm shit squished up over his balls and surrounded his shaft. I cleaned him up really well though, making sure to wipe every inch of him clean with my soaking wet wipes pulled right out of my wipe warmer.

After that JJ cooed and cried and said that he was hungry.

I know he had some Mommy’s milk in the fridge so I left to warm it up. Before I did go, however, I put JJ in his playpen. “Now be a good boy JJ and play. I will right back after I get your yummy milk all warmed up!” I left to the kitchen and began to slowly warm it up. All of a sudden from the living room I heard a large thud, followed by JJ’s “Uh Oh.”

I immediately stopped what I was doing and ran back to him. What I found was JJ on the couch and not in his playpen at all. On the floor was a broken clay vase. “Naughty boy JJ!” I said in a firm voice. He was not supposed to be jumping on the couch, that was what bad boys did and now he was going to get punished! I grabbed up JJ and pulled down his paper. Pulling the paddle out of my bag I informed him that he was a bad boy and was going to get a spanking now.

Rearing my hand back I took the paddle and spanked him hard against his bare skin. He cried out, but I knew I had to teach him a lesson.

I sat him down on the ground and asked him if he was sorry for what he did. Little JJ was a bad boy, he had the nerve to giggle at me and scrunch up his cute nose, fold his arms and say “NO!” That little brat stuck his tongue out and blew a zerbert at me! I could not beilive it! Well I had some more punishment for JJ!

I pulled out another punishment device I had in my bag. It was long and hard and strapped around this hot babysitter. It was a strap on! I turned JJ onto his back and told him I was going to stretch him out as punishment for being a bad boy and since he enjoyed his spanking so much! As I rammed my long strap on into the anus of little JJ he cried out. All I did was pull his diaper to the side too, so his hard cocky had to push against the now squishy diaper.

I leaned forward and stoked his hard shaft with my hand, rubbing it on the outside of the diaper.

He groaned and whimpered as I stuffed him full. I made sure to let him know this is what bad boys got. I told him bad boys got turned into little bottom bitches when they did not listen to their babysitters! He came filling up his diaper, I made him sit in it! Made him sit in his diaper for the rest of the day! I wanted to teach bad JJ a lesson one way or the other!

Do you need to learn a lesson with bad boy phone sex?