Hot Halloween Surprise: Discovering the Mysterious Slut Behind the Mask 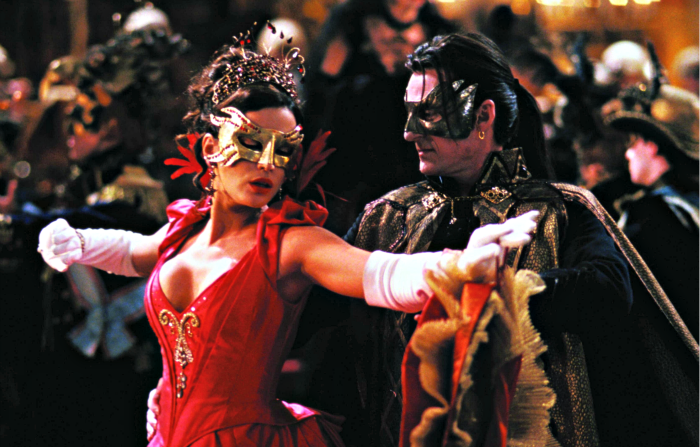 On nights like this, being in costume is the only way to play! Anyway, how did this hot Halloween surprise begin? Well, it almost didn’t begin at all! Angel came down with a terrible headache and told her husband to go to the party and have a good time.

Being the devoted husband, he protested, but she urged him to go, saying that their friends were expecting them. Said she was going to take some aspirin and go to bed. So finally, he took his costume and away he went.

After sleeping soundly for an hour, Angel awakened without her headache. Since it was still early, she decided to go to the party after all. Because her husband did not know what her costume was, she thought she would have a blast watching him, just to see how he acted when she was not around.

Donning her sizzling Mardi Gras costume with its resplendent, feathered mask, she joined the party. It wasn’t long before she spotted her husband, cavorting around on the dance floor. Wow, look at that mask. Dayum, he was in fine form tonight. Being a married man, you’d think he’d try to be subtle, but no. Not only that, but she could not believe the costume her hubby was wearing.

Dressed like some kind of superhero, the masked man carried a huge hammer.

And where did he get those huge muscles? Maybe it was just the costume, or perhaps he’s been working out more lately? Furthermore, Angel saw that not only was he surrounded by dancing women, but he’d also cop a feel here and take a kiss there. She’d never seen him act like this before.

Surprisingly, she didn’t feel jealous at all. In fact, she realized her nipples were tingling, her pussy was throbbing, and her panties were completely drenched! Indeed, it almost felt like some kind of supernatural fantasy.

This was definitely turning out to be a hot Halloween surprise!

Aroused herself, Angel enthusiastically danced close, encouraging him to touch her any way he wished. After all, he was her husband, right?

Finally, he whispered a little proposition in her ear. Grinning, Angel agreed, so off they went upstairs to one of the host’s bedrooms. Once there, they fucked their brains out, masks still on.

After putting herself back together, Angel went back down to the party. The music was pumping and the dance floor was crowded, so Angel lost track of her masked husband. Just before the unmasking ceremony at midnight, she slipped out. Next, she went home. Then, she stripped off the costume. After that, she got into bed, wondering what kind of explanation he’d give for his uncharacteristically wild behavior.

Angel was sitting up reading when her husband came in, and she asked him how his night had gone. He said, “Oh, the same old thing. It was cool. You know I never have a good time when you’re not there.” Then she asked, “Did you dance much?”

He replied, “I’ll tell you, I never even danced one dance, can you believe it?  When I got to the party, I ran into Tom, Jack, and some other guys, so we went into the den and played poker all evening. But I’ll tell you…the guy that I loaned my costume to said that he sure had an awesome time!”

Let’s create a hot Halloween surprise of our own. Call my phone sex hotline NOW!