A Young Attractive Stud is All a Mature Cougar Needs! I need some retail therapy at least once a week.

When I run into a young attractive stud, it’s always a plus. The other day I was out spending some of my hard-earned cash. I didn’t notice the overcharge till I was home. Usually, I wouldn’t mind if it’s just a few bucks, but it was $40, and I would not let that much money just slip through my fingers. I was tired and decided to wait till the next day to go back and point out the mistake.

I see the cashier charged me twice for the same item.

The next day the same cashier is working. So, I went to speak to her, but not wanting to rectify her mistake, she began to get loud and rude. I asked to speak to the manager. After a few minutes, he came over and introduced himself as David. He invited me to his office to discuss the matter. I followed him, but I couldn’t help noticing what a young attractive stud he was.

I wondered how he would look out of that tedious work suit.

That young attractive stud probably had a nice body and a six-pack too. Now all I could think about was what he looked like naked. I dream about young hard bodies, and it had been at least a few days since I’d had one. He shut the door behind us and said,

“Sorry about this. I hate it when a beautiful young lady is not completely satisfied.”

He was a flirt. So, I gave a little back and said, “Sugar, I’m old enough to be your mother.”

With a look of lust, he said, “What can I do to make this the best experience you’ve ever had in a shopping center?”

I had so many thoughts run through my head about that young attractive stud.

There was no way in hell I would play hard to get, so I went right to the point. I stood up and began unbuttoning my blouse. Letting it fall to the floor, then took the rest of my clothes off. He leaned back and licked his lips. I loved the look of want in that young attractive stud’s eyes. I walked over and sat my fat little ass right on the desk in front of him.

“Now I’m willing to forget about the money and the incompetence of your staff if you give me the best fuck you got. Can you do that?” I asked him. He didn’t answer. Instead, he leaned forward and spread my legs and ate my pussy like it was candy.

That young attractive stud had me hot and wet.

He reached down and unzipped his dress pants. Then I pulled his rock-hard cock out and stood up. I was ready to suck him down, but he grabbed my arms and bent me over his desk. He kicked my legs apart and shoved his cock, balls deep inside my slick pussy with one hard thrust. That young attractive stud gripped my long blonde hair and started pounding into me. Being bent over with his hard cock deep inside me was amazing.

My moans sent him into a frenzy.

I love a young attractive stud muffin. Don’t worry because I love you mature hunks too. Sometimes a woman needs a man with a slow hand. So, all you lovers out there, call me for the cougar phone sex you desire! 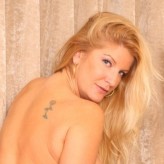 Good Southern Fuck: I’ll Be Waiting at the Bar for You!

I’m a kinky cheating wife, and I love a good southern fuck! So, when my hu...

Obviously, I wonder sometimes if my husband would freak if he knew what a hot wi...