I’m a tease. It’s just that simple. I love leaving men to wonder if I want them; if I crave them. For the most part, I just do it to see their pathetic faces as I break their hearts. See most of the time I deny their advances. But it feels good to move on to the next man and start the game of teasing all over again. This past weekend though, it didn’t go as planned. My teasing ended up with some rough face fucking. And I loved every minute of it.

Since everything is going back to normal I had a project for school I had to do. It was in pairs and it was just my luck that I had my class crush be my partner. The game started when I welcomed him into my place wearing a cute short dress. Derek commented I smelled good as I leaned closer than I needed. I touched Derek’s arms. I put my hand on his lap under the table. But once we were done with our project I simply told him I would see him Monday in school. Derek didn’t like that answer.

Are you really going to leave me like this?

Derek said as I stood by my front door. I obviously played dumb. I denied that I was doing anything and Derek didn’t believe it. Derek held my face gently as he told me just how gorgeous I was. Then, he slid his hand down my throat and pushed me up against the wall. Derek took my hand and placed it over his crotch as we were standing. His cock was hard and big. I felt it throb even over his pants. I was in trouble.

Getting The Rough Face Fucking I Need

Derek unzipped his pants and pulled out his big fat cock. He guided me down to my knees. Then, he put his fingers in my mouth and made me suck them. I really thought I could get away with just stroking his dick but before I knew it, Derek had shoved himself into my mouth. At first, he did it nice and slow. Derek still looked down as he gently caressed my face while his cock slid in and out of my mouth.

Without notice, Derek started pumping deep down my throat. He was definitely into some rough face fucking and I was about to find out. At some point, I couldn’t breathe and there was so much slobber dripped down I tapped his leg and tried to push Derek away. That did not work. Derek got rougher. He put his hand in the back of my head and pushed me right up against the wall.

Derek’s big thick cock hit the back of my throat. At times he would make me hold it. He would keep his dick down my mouth and then look down at me. Derek would smile and I knew this is what I got for being a teasing little slut. He didn’t stop until he came. Once Derek was done with me he left. Later that afternoon I got a text from him. Derek leet me know if I teased him again, no matter where we were, he was going to bend me over and fuck my ass. Now, I am thinking I might just do it and let him have his way with me again.

Do you wanna face fuck me? Hear me gag and choke? Call me for some teen phone sex! 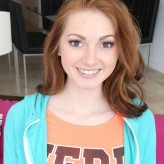 Naughty Sexual Fetishes: Which One Is Yours?♕

Lesbian Sex Fight: Don't Threaten Me With A Good Time

Amateur Teen Voyeur – Using A Peephole for My Own Pleasures

I’m the Perfect Teen Play Thing for You and Your Friends to Share!