Forced sex in the laundry

Forced sex was not on my mind as I stopped in the doorway of our apartment’s laundry and stared at her. We had dated for a while a few months back. But she had broken it off with no more explanation than that she did not think it would work.

Yet there she stood facing a drier in the bikini I had bought her. She managed to look sweet, sultry, and sexy all at once while sorting her clothes.

I could see that her bottoms were wet from her arousal. She had always soaked everything when she got turned on. Suddenly I was filled with a rage that she no longer graced my bed yet stood here in my gift obviously in a heightened sexual state.

I dropped my basket of cloths startling her. Stalking towards her with our eyes locked. I had no intention of anything really but then she lifted her chin, as her eyes turned into a challenge.

I could not stop myself. Grabbing her I pressed my body close to hers.

Then I ripped her bikini off and made her lean over the dryer, spreading her legs and pulling her hands behind her back. Taking some of her dirty nylons, I quickly tied her hands together.

Then, while twisting and rapidly pumping the other, I gently eased it out and rammed part of it in her ass.

When she is all the way down, I open my ass close to her face and told her to eat it. I put my arms behind me and held her head in place as she tongued my ass.

Then I made her lean over the dryer again, with her legs again spread wide. I rolled up some of her panties into a ball, tied nylon around it.

And then stuffed and secured this ball gag into her mouth. Then, without any warning, I begin to fuck her cunt with my now rock-hard cock.

Her breathing became faster and faster, as her moans became louder and louder, though still muffled by the gag. She began to fight uselessly against the bonds that held her arms.

Then, as I was closing to coming, her body jerked and writhed as she screamed into her gag. I fucked her harder and faster as she experienced one orgasm after another.

Just before I came, I quickly pulled out, pushed her to her knees,

and shot all over her face. Her beautiful face was covered and dripping with my juices of love as she begged for more. 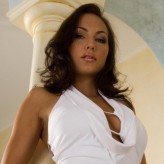