My Boss Loves Sniffing My Butthole Before Every Meeting

Mr. Anderson, or Michael as I later would call him, always kept his distance. He was always very professional until one morning right before a very important meeting with some new investors. I knew he was nervous since I arrived because he kept pacing back and forth in his office, talking to himself. He phoned me in and as soon as I walked in he told me to close the door. I told him to calm down, and that everything was going to be okay. To be polite, I asked him if there was anything I could do to help him with his nerves.

“There is something you can do Adriana. Please don’t freak out and if at any point you don’t want to do it let me know.” He continued. “. I want to sniff your young butthole. Like I said, you don’t have to do it if you don’t want to.”

I was hesitant but agreed, I mean it was just a one time thing. He laid on the floor on his office. I pulled up my skirt and took off my panties. He bent me over on his desk, right in his office. I felt him take deep breaths. Long deep breaths into my butthole. Then, without me knowing he was going to do it, he started licking my butthole as well. It felt so good, soon enough my pussy was dripping wet. Soon after that he was going back and forth between my pussy and butthole. Tasting both. Taking deep long breaths into my ass. I came so hard.

Now, everytime Michael needs to relax, there I am! 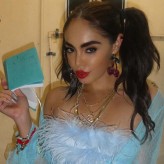 Worship My Perfect Ass: Anilingus Is Where It Is At!

Worship My Perfect Ass: Have you seen my ass? When I tell you to worship my perf...